Culture is a way of life. I recall students parroting back this simple definition to my grade school teacher during Social Studies class. Though my young mind had limited understanding of the phrase, I have always enjoyed learning about different cultures.

Yet, sometimes the view gained in Social Studies and History classes when studying cultures has more of a name the state flower and state bird feel rather than a real sense of the heart of a culture. I have found that one of the best ways to experience culture is through reading non-fiction and fiction narratives. Through the novels that I have drunk from over the years, I have gained a love of Orthodox Jews and Hasidic Jews. Books by different authors helped me understand a culture that bound young girl’s feet. I saw the segregated South through the eyes of a black girl in way that touched me more than any text book. 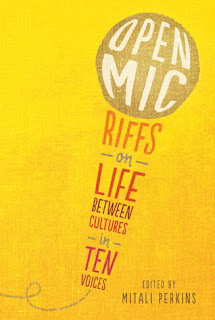 Mitali Perkins compiled a collection of fiction and non-fiction essays written by people of different cultures in “Open Mic Riffs on Life Between Cultures in Ten Voices.” Teens are the target audience but I think it appeals a lot to adults too.

Perkins website and blog are an open and safe place to study cultures. She is the author of multi-cultural books for young readers including “Secret Keeper,” “First Daughter: Extreme American Makeover,” First Daughter: White House Rules,” “Rickshaw Girl,” “Sunita Sen,” “Monsoon Summer, ” “Tiger Boy” and “Bamboo People.” I think she has lived up to her name, which means “friendly.” Being friendly was an important tool for her as she was the “new girl” over and over in her youth. Perhaps she has such a broad perspective of cultures because lived in many lands. She was born in Calcutta, India and her parents continued to raise her in the strict Bengali way in each setting. Before being the “new girl” in seventh grade in a California, she had lived in Ghana, London, Cameroon, New Mexico, and New York. Following high school, she studied political science at Stanford and Public Policy at U.C. Berkeley. She has taught middle school, high school, and college. She is available for visits to schools and other events where she shares her views of growing up between cultures.

Sometimes what we need is more humor when looking ourselves and others. The good natured humor in this book edited by Perkins breaks down barriers. The essay by David Yoo titled “Becoming Henry Lee” made me laugh. The protagonist attempts to use cultural stereotypes about Asians to his advantage with amusing results.

The following are my fresh impressions of one of the essays: I just finished, “Viola!”  It was so endearing. If one were in the waiting room seeing a wrinkled elderly lady who didn't speak English, it would be easy to miss that she was a true gem. It was so personal and dear to go back to when the author was a child and their secret about magic. There is so much richness to that essay!

Perkins mostly non-fiction account of her crush in “Three Pointer” seemed quite universal to me as someone who has had her own boy crushes. It always gave a glimpse of her strict parents adhering to Bengali customs while raising the family in the USA.

As you get to know the characters of the various essays, you see how they defy stereotypes. In my schooling, I learned that there is a phenomenon with ingrained stereotypes. People can have numerous examples of exceptions to the stereotypes. And I mean a lot of examples. Then, one incident can fit a stereotype after scores of other examples that do not match a stereotype and people will focus on this incident as further proof that stereotypes are right.

Someone suggested that believing stereotypes is illogical when you look at how different people can be in the same family.

I know there is a lot of talk about the importance of tolerance when it comes to other cultures and religions. I think tolerance is what we need for those we love who surprise us in the best of ways at times but in between get on our nerves. Then, there is the need to just be civil around those certain people. We all probably know some of them in our community. Tolerance is for the who squeeze the middle of the tooth paste or leave their socks on the floor if we squeeze the end or believe all dirty clothes should immediately be placed in a proper hamper or thrown down a clothes chute. Yes, those are probably petty and silly examples. Yet, they represent the little things that can add up without a big heaping helping of tolerance. To me, culture of civilized groups is by and large the rich traditions that we want to pass down.

We may need tolerance when people unwittingly do offensive acts because norms vary between cultures such as looking directly into the eyes of the older generation of adults when that culture believe that to be impolite. But as a whole, culture is wisdom and bonds and not in need of tolerance.

As for religious beliefs, I do not know what there is to tolerate about people with religious texts of different faiths and various places of worship and rituals with the goal of becoming better people. Show me someone living the tenets of any of the world’s major religions and you are showing me a good neighbor. We may need tolerance when some of us our over-zealous in sharing our religions. Do not get me wrong, I believe that we can and should share our faith and invite others to learn more if they so desire. We should never force as a forced belief is not a real belief. Maybe there are other needs for tolerance when it comes to religion. I think we should generally substitute the word tolerance with respect for other religions. One of the greatest things about America is its foundation of religious freedom for all faiths as long as they do not violate the law.

I wish that I were connected with the cultures of my past generations. My maternal grandfather was a first generation American. His parents were both under 18 from what I understand when they came to America. I am told that the older children spoke some German. My grandpa was the second youngest of nine and spoke very little. There is so much I would love to learn about the German custom of his father and the German customs on my dad’s side of the family. I would love to learn more of the Dutch customs of his mother. The best we do is displaying wooden shoes, windmills, Dutch figurines. In spring we have several groupings of tulips drawing our minds back to Holland. I am grateful that through the study of my family that we have learned a lot about Irish ways but not nearly enough. At least, that is one of my ethnic groups with set day to celebrate being Irish and St. Patrick.

I believe it should be possible to be a good American in every sense of the word and also pass on the good customs of my heritage.

I believe that people from all ethnic backgrounds can learn from each other and also embrace their heritage by learning about the wonderful role models and customs of their people.

This spring, Brian and I celebrated our 21st wedding anniversary with a scuba diving divecation on a liveaboard in the Bahamas. Since our Blackbeard's shark feed dive, Shark Week is every day in our household. Why? Because we got to enjoy the majesty of these underwater creatures in their natural habitat.

To commemorate Shark Week, here's a video journal of The Brown's very first scuba diving shark feeding dive in the Bahamas! This Facebook video is filmed on a GoPro courtesy of our Blackbeard's Cruises' Divemaster Jason Russell-Smith and my Dive Buddy for the shark feed dive, Jocelyn Hunyadi. I'm wearing pink fins in the video and Brian is kneeling besides me. For Shark Week, here's Hunyadi's video journal of our shark feed dive in the Bahamas:


It's Shark Week! So, come on a Bahamas shark feeding dive via the Blackbeard's Cruises with us! Real scuba diving...
Posted by Population We on Wednesday, July 8, 2015

I was so moved by our scuba diving shark experience (I hope you are too) that I'm currently working on a story for my upcoming short story book. Until then, happy shark week and keep diving!
(Editor's note: You need to log into Facebook to view this video. If you enjoy the shark footage make sure to like it as well as our Facebook page.)