For November, our population-we™ (pop-we) Dinner Club chose the Bonefish Grill located at 120 Regency Parkway in Omaha, Neb., for their monthly dinning experience. The Bonefish started business in St. Petersburg, Fla., with their first location in 2000 and have been spreading north and west ever since. They were set on introducing people unfamiliar with having fish to a unique dinning experience. They also offer non-fish items for those destined to never desire the fish experience.

My bride and I descended upon our Bonefish Grill shortly before the 6 p.m. reservation to find many of the group already there. The waiting area was a little cramped but it was evident that service was going to be a hallmark of the evening with waiters and hostesses tending to your needs. The free samplers while you waited were a nice touch.

Once our party had all arrived we were seated at our table and immediately the wait staff started refreshing our drinks, taking orders for appetizers, and placing the bottomless baskets of bread out for our enjoyment. The Bang Bang Shrimp is a must have.  It seemed like the Sangria was quite good also.


Being a mixed lot our group had fish and non-fish orders that ranged from the Fish Taco and Diablo Shrimp Fettuccini to the Fontina Chop and Filet Mignon. It was my pleasure to experience the Diablo Shrimp Fettuccini; this involves taking shrimp with tomatoes, capers, onions, green chiles, spinach fettuccine and placing it with garlic cream sauce. As I’ve aged, garlic has become a favorite base for many things but this was a great, balanced, flavor combo, with each ensemble having its turn with a solo. It seemed everyone thought that their dish was the best though. As a final delight a few of the fairer sex at our table decided Creme Brulee was in order and before it was gone it was something we all had to try.


After compiling the surveys from the other foodies the pop-we Dinner Club gives Bonefish Grill: 4.45 star average on a scale of 1-5.

You can see more regarding menu and catering services on their website at http://www.bonefishgrill.com/our-menu/

Fellow population-we™ readers, if you’ve been to the Bonefish Grill leave us a comment and tell us what you thought?

Want to do this yourself? To review how to start your own dinner club, visit our January post about doing just that. Remember it is a template; tweak it to fit you and your friends’ tastes. pop-we Dinner Club: good food…good friends…good times.

At our house we proudly display a pillow that reads: “This home is blessed with family, friends, laughter, love, and dogs.” Dogs make our lives complete. What would we do without our dog companions? Well, now's the time to repay their love and loyalty. Your furry friend could end up being featured in DOG FANCY’s August 2012 issue and earn other prizes.

The nominations for the DOG FANCY’s Forever Young Photo Contest will close in the middle of April (April 16th). Every dog is forever young in their eyes and in ours. However, there is an age limitation for all entries. Your dog companion has to be seven years or older to be considered.

A couple other population-we™ staffers have dogs, too. You can see them at our pop-we Pinterest board. Our dog is 91 (in human years she is 13). In honor of this contest, we decided to share with population-we™ readers the story of how Pepper came into our lives.

Some 13 years ago, Pepper found herself in our backyard. She lived next door and found a way to squeeze through the fence. I went to let our other two dogs (Veruca and Neo) in and found myself with three dogs in our backyard. Our male dog and Pepper looked like they were from the same litter. I literally thought I was seeing double. This would happen on and off again for a couple months. On a couple occasions we’d encounter Pepper roaming the streets by herself. Almost seeing Pepper get hit by a car, Brian & I decided to have a talk with the neighbors. It was decided they would surrender Pepper to us. We took her to the vet and she immediately could tell Pepper was abused. Pepper’s tail was broken in a couple spots. Since the break was too old there was no way to repair it. Today, we only have one dog, Pepper. A mutt by all accounts, Pepper is still one of the smartest dogs I’ve ever known. Pepper enjoys rolling in the grass, eating sticks, playing fetch, long walks and living in the country. At her last checkup our vet told us her eyes are showing her age. Pepper has a couple growths and clouding of the retina. Besides, that she was given a clean bill of health. In the end, Pepper chose us and found out that indeed the grass is greener on the other side.

So, there's no time to waste, nominate your senior dog today. Enter at this link.  And, remember Roger Carras quote: "Dogs are not our whole lives, but they make our lives whole."
-population-we™ blog post by Becky Bohan Brown
© 2012 population-we, LLC
If you enjoyed this post, make sure to leave a comment, 'Pin' or 'Like' it.
Pin It
Posted by Unknown at 12:01 AM 1 comments


Since we've started Brian & I have spent two Hallmark holidays with our trainer. I hope this shows our dedication and how The Brown's lives have been affected by athletic training. Instead of a high fattening dinner with sugary drinks; Brian and I met our trainer, Mike, at UA for evening PT sessions on Valentine's Day and Fat Tuesday.

We both do have a little trepidation when we get a new session from Mike. Each time we get introduced to new equipment and exercises we've never done before. To celebrate National Athletic Training Month, Brian & I thought we’d share a synopsis of all our PT sessions for fellow population-we™ readers who might be looking to mix up their workout routines. 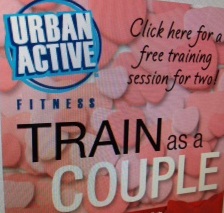 After training with Mike, we feel even more energized and motivated. With this UA “Get Active Challenge,” Brian & I both feel like we've turned a real corner in our journey to become the more fit people we know we can be. Mike has provided tips and words of encouragement along the way. With this post we salute the work of athletic & personal trainers nationwide like Mike. Step 4, continue to get stronger, leaner by following the lead of Mr. Good.
(Editor's note: This is the fourth in a series of blog posts about UA's Get Active Challenge)
-population-we™ blog post by Becky Bohan Brown and Brian Brown
© 2012 population-we, LLC
If you enjoyed this post, then make sure to leave a comment, 'Pin' or 'Like' it. Pin It
Posted by Unknown at 12:01 AM 0 comments

Calling all volunteers! The University of Nebraska at Omaha’s (UNO's) 10th Annual 7 Days of Service is just around the corner. Are you interested in restoring or building a new home? Creating a community garden? Beautifying Omaha parks and nonprofits? Providing service to organizations that specialize in homelessness and poverty? If so, 7 Days of Service is the perfect service opportunity for you. Activities will officially kick off on Saturday, March 17, and continue the week of UNO's spring break Monday through Saturday, March 19-24.

Since its inception in 2003, UNO students have chosen to forgo their spring break plans and donate their time serving their community as part of UNO’s 7 Days of Service project. Two population-we™ staffers participated in the annual 7 Days of Service volunteer effort in Omaha last year. Brian & I didn't just participate, we both served as the job site coordinators. To qualify, we attended an hour debriefing before the event and received instructions the day of. We both were in charge of the UNO crew.

Upon arriving we could tell it was going to be a total team effort. Other volunteer organizations met us at the designated site: AmeriCorps, Habitat for Humanity and parishioners from a local church. Armed with the know how and right equipment the heavy lifting was left to the AmeriCorps team. The day consisted of clearing brush and chopping down trees, as well as limbs at a future site for a Habitat for Humanity house in North Omaha. For nearly six hours, chainsaws were spewing, trash was collected, prickly weeds were bagged and poison oak was avoided. This was a day of hard labor; but with a small army of volunteers we finished a head of time.

The mission of 7 Days of Service is to facilitate the building and strengthening of the Omaha community by actively engaging with the community and responding to the urban need. The feeling of accomplishment working together to get this site ready for a house is something Brian & I will never forget. We both recommend getting your hands dirty with this wonderful service project. So far, more than 800 will participate this year, including both Brian & I. Join UNO for a day of teamwork and service; register today!

Volunteer one, two, three, or all seven days by registering on UNO’s website at http://www.unomaha.edu/serve/7dos2012.php. Breakfast, lunch, and T-shirts are provided to all volunteers. Shuttle service is also provided. Check in begins at UNO in the Milo Bail Student Center Fireplace Lounge at 8:15 a.m. The day concludes by 3 p.m.

Questions or concerns? Contact UNOServe@unomaha.edu or the UNO Office of Student-Community Leadership and Service at 402.554.4083 or stop by 112 College of Public Affairs and Community Service on the UNO campus.

(Editor’s Note: This is the third blog post inspired by our day of volunteer and community service efforts at the 2011 UNO 7 Days of Service. Click on these links, to view other population-we™ posts on Trash Walk and AmeriCorps.)
-population-we™ blog post by Becky Bohan Brown
© 2012 population-we, LLC
If you enjoyed this post, then make sure to leave a comment, 'Pin' or 'Like' it. Pin It
Posted by Unknown at 12:01 AM 0 comments